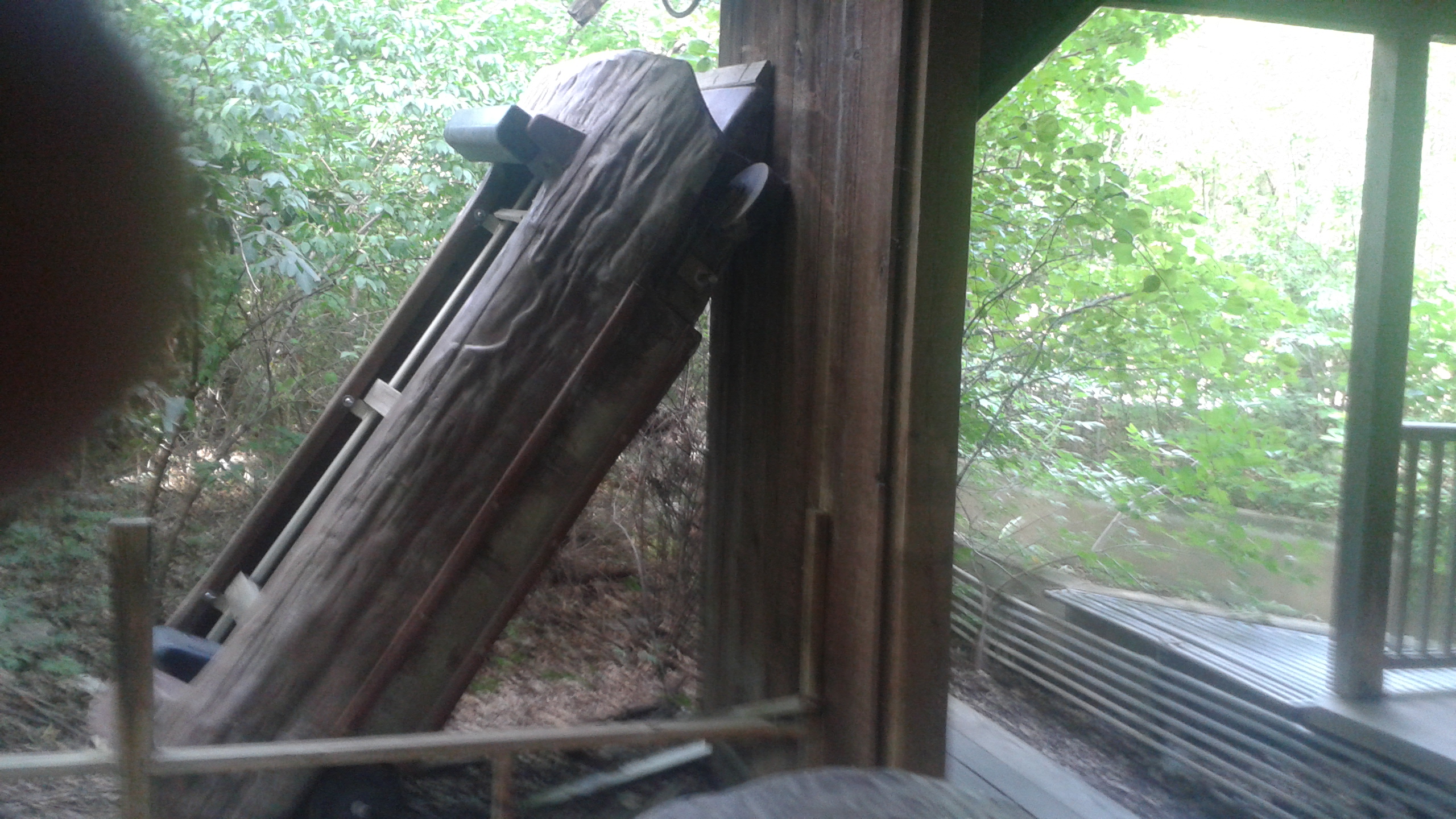 Joyland Amusement Park is an abandoned amusement park in Wichita, Kansas, United States. It was in continuous operation for 55 years, from June 12, 1949 to 2004, closing permanently in 2006.[1] It was once the largest theme park in central Kansas and featured a wooden roller coaster and 24 other rides. With its closing, the only remaining amusement park in Kansas is Schlitterbahn Kansas City. On July 1, 2016, the new owners started to tear down the park.

The park was founded by Lester Ottaway and his sons Herbert and Harold to serve as the home for a miniature 12-inch (300 mm) gauge steam locomotive that Herb Ottaway had purchased in Fort Scott, back in 1933. The train had been part of a defunct amusement park there and was originally built by the Miniature Railway Company of Elgin, Illinois, between 1905 and 1910. By 1934, Herb Ottaway, who worked as a race car builder, had fully refurbished and restored the steam locomotive and cars and began transporting the miniature train to county fairs in western Kansas and eastern Colorado. Ottaway soon built a track for his miniature locomotive around the Manitou Springs, Colorado, racetrack and operated the train there for some time.

The current location of the park came into existence on June 12, 1949, primarily to give Harold’s miniature locomotive a permanent home in Kansas. It was originally located at 1515 East Central in Wichita (between New York and Mathewson streets) but soon moved to its current location at 2801 South Hillside. After Lester Ottaway’s death in the mid-1950s, his three sons, Herbert, Harold and Eddie, continued running it as a family operation.

The Ottaway brothers retired from the amusement park business in the early 1970s and sold the park to Stanley and Margaret Nelson. Stanley died on July 13, 2010, at the age of 87. He and Margaret were the driving force behind the park for over 30 years and a large percentage of its current rides, including the Bill Tracy-designed prototype Whacky Shack dark ride, added in 1974, come from the Nelsons’ time as owners. Though there are a few Whacky Shacks still in use across the country today, this classic two-story dark ride was the last known project of Tracy’s, as he died in August 1974, just a few months after its completion. In addition, the original miniature train retired with the Ottaways and was replaced with the first-ever C.P. Huntington miniature train. It carries serial number 1 from the factory.

21st century
The Ferris wheel, manufactured by Eli Bridge Company and operating there since its 1949 opening, was the site of an accident in mid-April 2004 in which a 13-year-old girl fell 30 feet (9 m) from it and was seriously injured. The U.S. Consumer Product Safety Commission investigated the accident.

Due to economic troubles and safety concerns the park had to close for the 2004 season. Interest in it sparked again in 2006 when a Seattle-based company, T-Rex Group, leased it to restore and open portions of it. After financial concerns, they did not open the park for another season. Since 2006, the park stood empty, unkept, and deteriorated. Since its closing in 2004, it has been subjected to numerous incidents of vandalism and looting. Nearly every building is covered with graffiti, and the vintage sign from the top of the roller coaster has been stolen. The administration offices have also been destroyed. Park owner Margaret Nelson was quoted as saying, “We’re sick. Our hearts are just sick. It’s not easy, not easy.”

In 2006 many renovations took place at the park, of which were focused more on its aesthetics than actual ride safety. The roller coaster had $10,000 dollars worth of wood repairs done and was renamed “The Nightmare”. The Log Jam, the only water ride, had pumps replaced and systems checked. The noticeable difference to the park after the 2006 restoration was the baby blue and pink paint that covers it. The Restore Hope organization got involved to regain support to rebuild the park with an emphasis on a community effort and involvement in the restoration process. The plan is to restore it within the next few years and begin a five step expansion process to help it grow and become an integral part of the Wichita community.

On August 4, 2012, a maintenance building in the park caught fire. None of the rides were damaged and the fire was subdued in 30 minutes. Police suspected arson.

In May 2014, it was announced that Joyland owner Margaret Nelson Spear donated the carousel to the Botanica in Wichita, and it will be fully restored.

In the middle of June 2014, the iconic parking lot sign and marquee was sold to the Historic Preservation Alliance of Wichita and Sedgwick County. It was dismantled, removed for local storage, and eventual restoration.

On February 19, 2015, the Wichita Police Department announced the return of Louie the Clown, the animatronic clown that used to play the park’s Wurlitzer organ. He had gone missing over a decade prior and was found in the home of Damian Mayes, a former Joyland employee. In 2008, Wichita police received a tip that Mayes, who had maintained Louie and the organ, had Louie, but he denied knowing his whereabouts.

The roller coaster was extensively damaged by a windstorm on the morning of April 3, 2015, including the destruction of large portions of elevated track. In mid-April, Roger Nelson, the son of Joyland owners Stan and Margaret Nelson, told reporters, “We are in the process of tearing it all down”, referring to the roller coaster and the remaining buildings on the site. He had announced the previous week that the Preservation Alliance had purchased a number of the park’s marquee attractions, including the Whacky Shack building and a horse and buggy ride, and was negotiating to purchase the full-size train caboose that was stationed at the west end of Frontier Town. On July 23, 2015, the components of the roller coaster which remained standing were demolished.